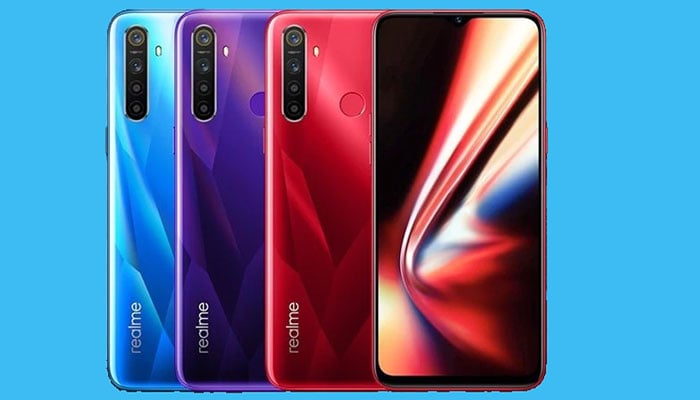 The phone comes in 4 GB of RAM and 64/128 GB of internal storage. The smartphone run on Android 9.0 Pie. It will most probably have a triple camera setup on the back. The Realme 5s will have a 5000 mAh battery to power the 6.5 inches display.

It was announced in the last week of November 2019 in Pakistan. Realme 5s is an affordable handset that can fit into any type of requirement. This new model has some exciting improvements when compared to its predecessor Realme 5. Perhaps the company’s most inspiring mission is to compete directly with one of the most popular and average ranges of cell phones.

However, it all depends on the type of user, as this mobile phone features very high specifications and is offered at an appropriate price. This has a mid-range chipset from Qualcomm and has been used on several budget handsets in the past.

The new 5s is running the latest operating system that is known as Android 9 Pie and it is based on ColorOS 6. The specs and the design of the phone are very attractive and will be a budget phone as well. Even though it is a slightly older chip, it is still considered to be among the best budget SoCs available for Android devices.

The side bezels are thin, but the phone has a thicker chin. The large display adds to the viewing experience. Using the phone under direct sunlight is not hurting, as because of the satisfactory brightness levels. The location of the buttons and the camera module is the same as other Realme phones. There is a quad-camera setup at the back which is aligned vertically.

The LED flash is placed next to the camera module. On the back is also the fingerprint sensor to unlock the device. Realme 5 also supports face-unlock as a security feature. It comes with a good set of the camera which can be ideal for photography lovers without burdening pocket capacity. There is a strong processor that can deal with gaming or another usage while the battery is also massive to produce power for more than a day.

Overall, it is a great smartphone but beware of the absence of a full HD display resolution. Realme 5s comes with a 6.5-inch IPS LCD having a screen resolution of 720 x 1,600 pixels. There is a pixel density of 270 PPI which can provide a decent viewing experience. The smartphone features a 16MP and 2MP rear camera that can capture good pictures whereas a 13MP front lens can click remarkable images.

The Realme 5s is powered by the Snapdragon 665 SoC from Qualcomm. The SD665 SoC equipped with an octa-core processor with twin clusters of Kryo 260 cores clocked at 2.2 GHz and 1.8GHz. The SD665 chipset also comes with an Adreno 512 GPU for graphics. Realme 5s comes in a 64 GB internal memory that can keep a lot of files and data of the users. It also has an expansion of up to 256 GB with the help of a microSD card. There is also a good chance that higher memory and storage versions would be launched. The display on the Realme 5s measures 6.5 inches across and has a resolution of 720 x 1600 pixels. With 270PPI, the display is fairly sharp. This model is protected by Corning Gorilla Glass 3+.

The Realme 5s features a quad-camera setup consisting of a 48-megapixel primary camera and an 8MP secondary ultrawide lens, a 2MP macro lens, and a 2MP depth lens. The rear cameras get an LED flash for low light situations. At the front, the phone gets a 13-megapixel secondary camera that can also be used for outstanding video calls and selfie making. To keep the device running for a long time, there is a 5,000 mAh non-removable Li-ion battery that can last for more than one day even with heavy consumption. Hence, the device fits extreme usages.

Come Visit Us to get Special Discount